It’s the beginning of October and I’m striding along the River Genil in Granada pushing a bright orange shopping trolley full of my art prints in front of me. Turning for a second to look downriver, Granada glows beautifully in the soft morning light. You can tell it’s going to be one of those gloriously warm autumn days, our last taste of summer before the cold arrives without warning and takes over for a few months. Granada is a city of sharp contrasts: summer and winter, hot and cold, sun and shade; there’s not much in between. 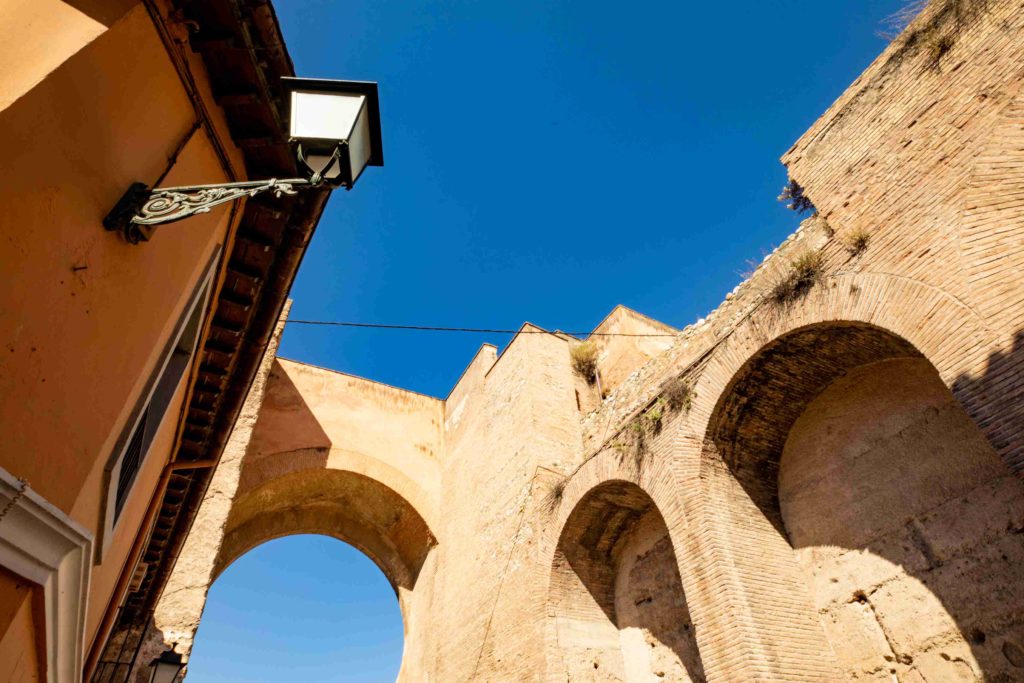 Nearing the end of the promenade, I raise a hand to shield my eyes from the sun and spot a curly-haired man sporting a camera and a backpack happily waving as he bounces along energetically towards me. Meet Paul: the man behind the lens of Paul Ainger Photography. He smiles widely and apologises profusely for arriving late despite having left early, all thanks to a bus stop mix-up resulting in him being treated to an unplanned tour of Granada and its outskirts and then having to walk all the way back into town to meet me. We decide to head to the riverside restaurant Las Titas for a hit of caffeine while we plan the day’s shoot and Paul recovers from his early morning adventure.

Over the last few years I’ve built up a collection of illustrations of the city and the idea is for Paul to photograph me and my prints of Granada in the places that inspired them. With a total of 16 designs to shoot all over town it’s no small feat! Just as well Paul has already warmed up. 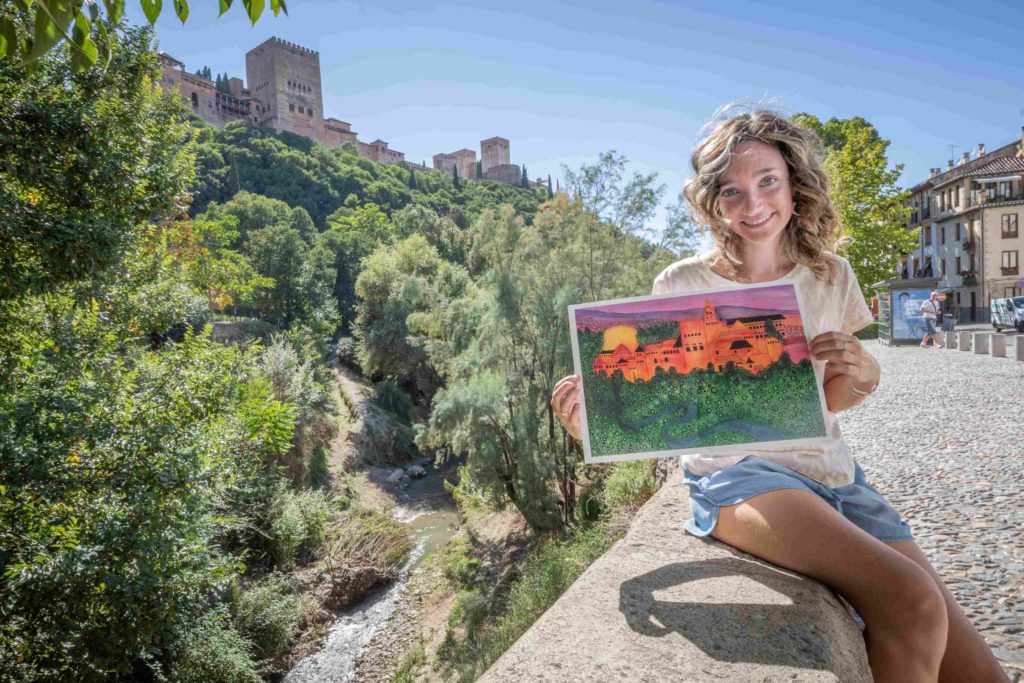 We decide to start at the other end of town and work our way back towards the centre, then head up to the Alhambra and the Paseo de los Tristes area and finally the Albaicín and Sacromonte to catch the sunset. We have a lot of ground to cover so I’m thankful that Paul is no stranger to racking up miles on the pedometer. A keen walker, he and his friend Tim West created 45 Degrees West through which they raise money for charity by completing self-set walking challenges. In 2014 they hiked from John O’Groats to Land’s End in order to raise money to fund a St Giles’ nurse for a year. 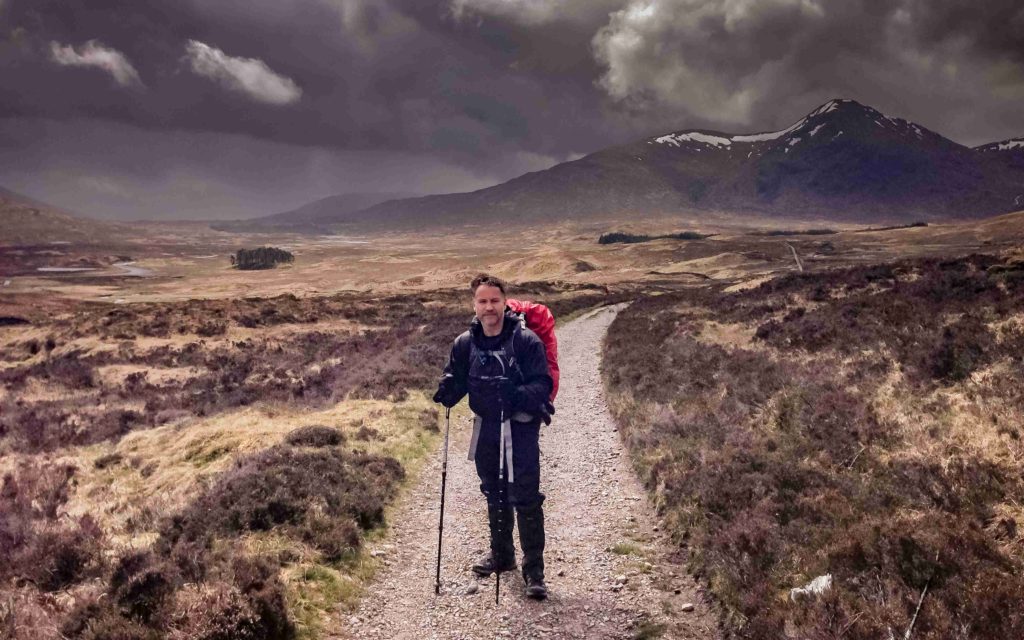 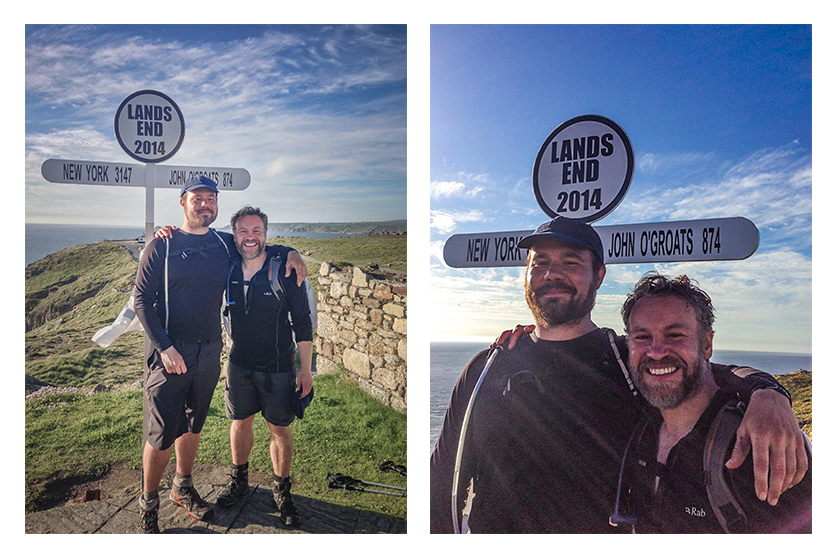 But Paul and Tim aren’t stopping there! They’ve set themselves a new challenge for April 2019: to raise £7,000 for the stroke ward of Burton-upon-Trent hospital by walking through 7 national parks in England in 7 days, this time accompanied by their friend Dave for whom it’s a very dear cause. You can follow their footsteps on Facebook and Twitter and donate here.

Having finished our refreshments and planned our route, we set out with our trusty trolley companion, Trudy, for our first port of call: Triunfo park. 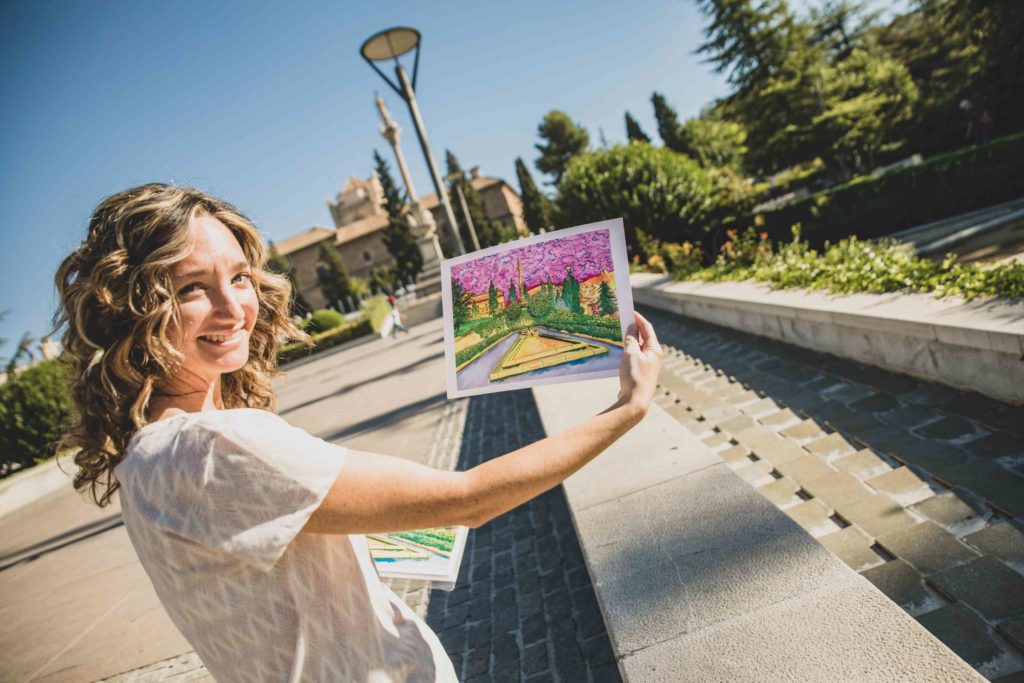 Paul stumbled upon his love of photography at the tender age of ten or so while on a family holiday in Wales. Given permission to use his dad’s camera to take a photo of the sunset he headed off up the hill, lay down in the grass and looked through the viewfinder at the painted sky before him. Just like that, he stepped through the wardrobe and out into Narnia. Little Paul discovered that by squinting through a tiny window and pressing a button, he could stop time with just one click. A moment that would have been lost was instead frozen forever to be relived, remembered, enjoyed and imagined over and over. 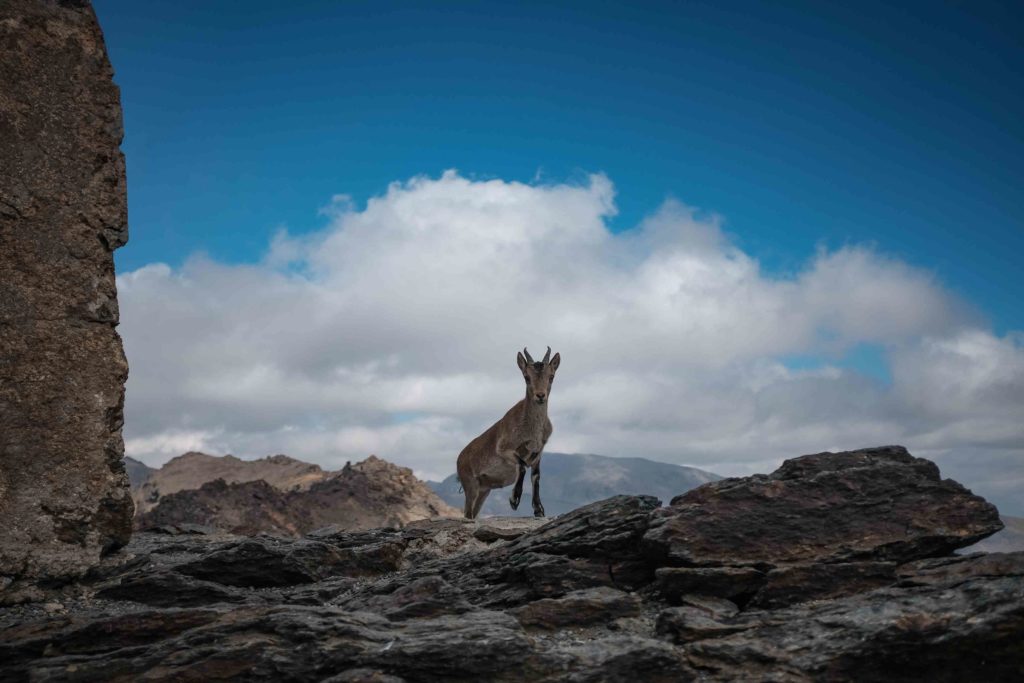 Not only that, but seeing life framed in a camera lens gave him a new perspective on the world around him. Paul talks of a defining moment for him and his journey with photography being back in 2003 when, armed with a new digital camera, he travelled to Thailand for his brother’s wedding. Looking at the photos afterwards, he particularly enjoyed the spontaneity and emotion of his photographs, the two elements at the heart of his street photography. 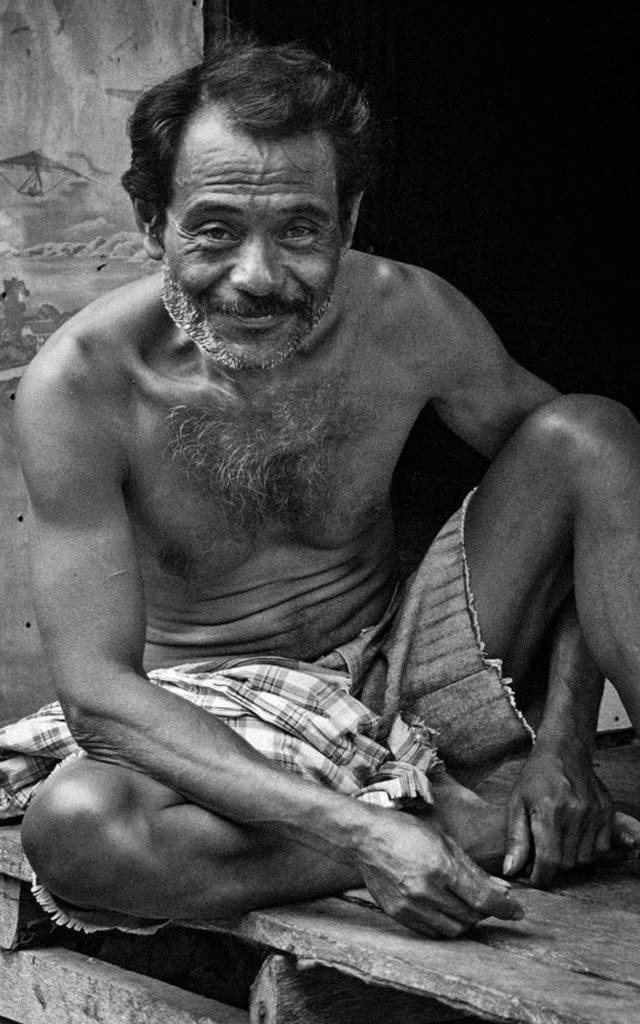 For Paul, it’s the unpredictability of street photography that he enjoys. Sometimes he has a feeling that something special is about to happen, other times it’s completely unexpected. Unlike my artwork, in which I can use artistic licence to play with colour, perspective, and even add or remove parts of the composition that aren’t to my liking, Paul’s photographs capture real life in real time. 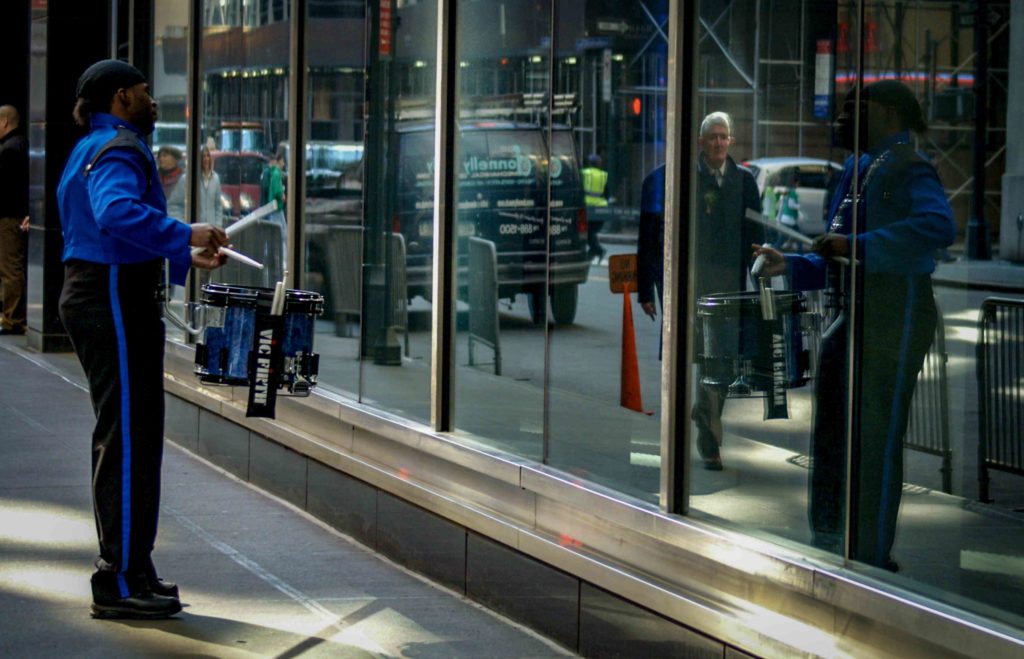 That’s what Paul’s street photography is all about: capturing a person in a certain moment that will never be repeated. Just as small curly-haired Paul had discovered all those years ago lying on the damp grass as the sun went down, you can never take the same photo twice. 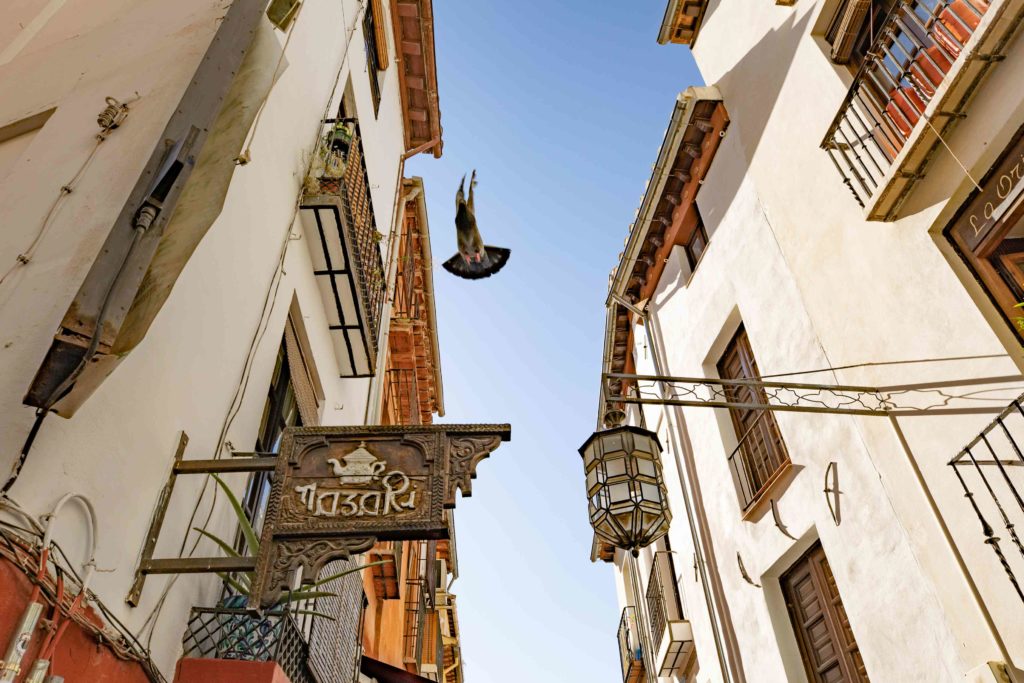 Paul appreciates the humility and honesty of a photograph taken when the subject is unawares. Perhaps the person in question has never before seen themselves in that particular light. The camera catches a glimpse of the true inner self, caught momentarily off guard, peeking through the armour of the image we all present to the world. 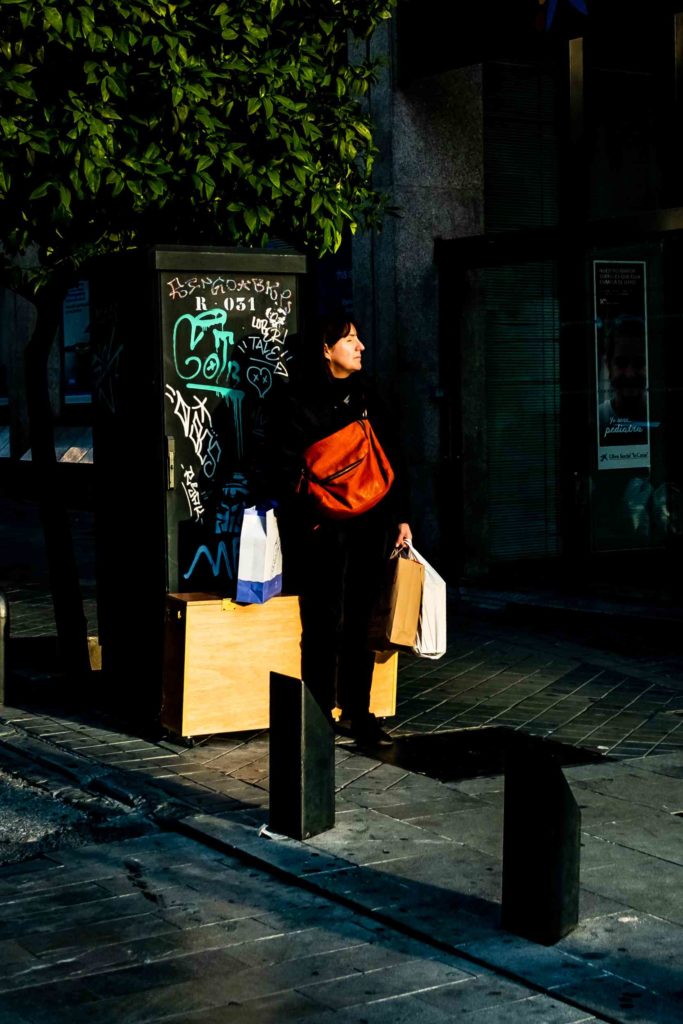 I ask Paul what his favourite emotion to capture is and, after some pause for thought, he replies “happiness”, because he thinks that is the one moment when people really lose themselves and aren’t aware of their image.

With the sun now high in the sky and my squinting having reached uncontrollable levels, we stop for lunch near Plaza Bib Rambla. This isn’t Paul’s first time in Granada. In fact, he had visited two years before, which is actually how we met and ended up working together this time around. Personally, one of my favourite things to do is to wander around Granada and I’m always inspired by its streets. Despite having painted it time and time again, I don’t think I’ll ever tire of capturing its views on paper and canvas. 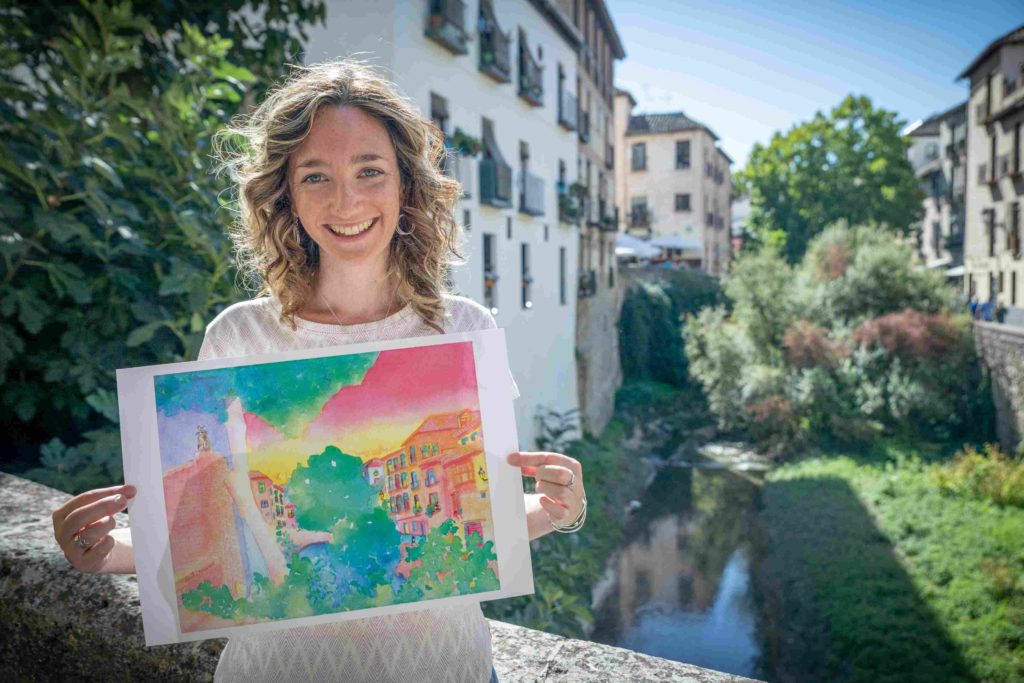 Just the other day, a friend who has lived in Granada for about twenty-five years commented how he stumbled across a little square in the heart of the city centre he had never seen before. I definitely share the sentiment that there is always something new to be discovered, or a different way of seeing something that has been there all along, you just have to be ready to see it. Paul describes something similar that happens when he’s walking with his camera, whether in the city or the countryside. He finds that stopping to take a photo and set up the shot forces him to really consider his surroundings and look around, rather than just passing on through in a blur. 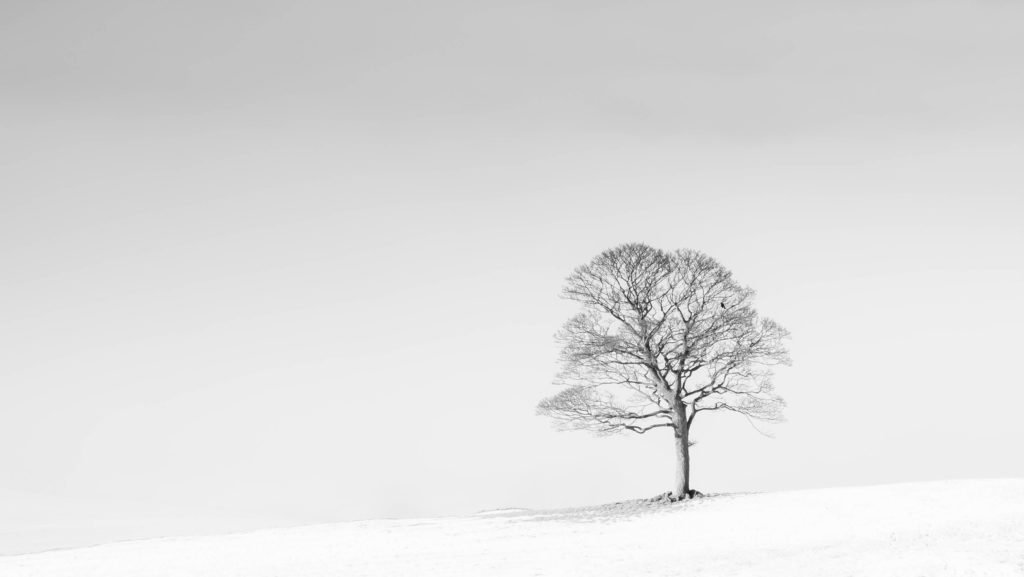 As someone who’s been in Granada for a few years now, I’m really enjoying seeing the city through Paul’s eyes as we wander up hill and down dale in the afternoon heat, buoyed up by our lunch break, Trudy trundling along on the cobbles beside us. 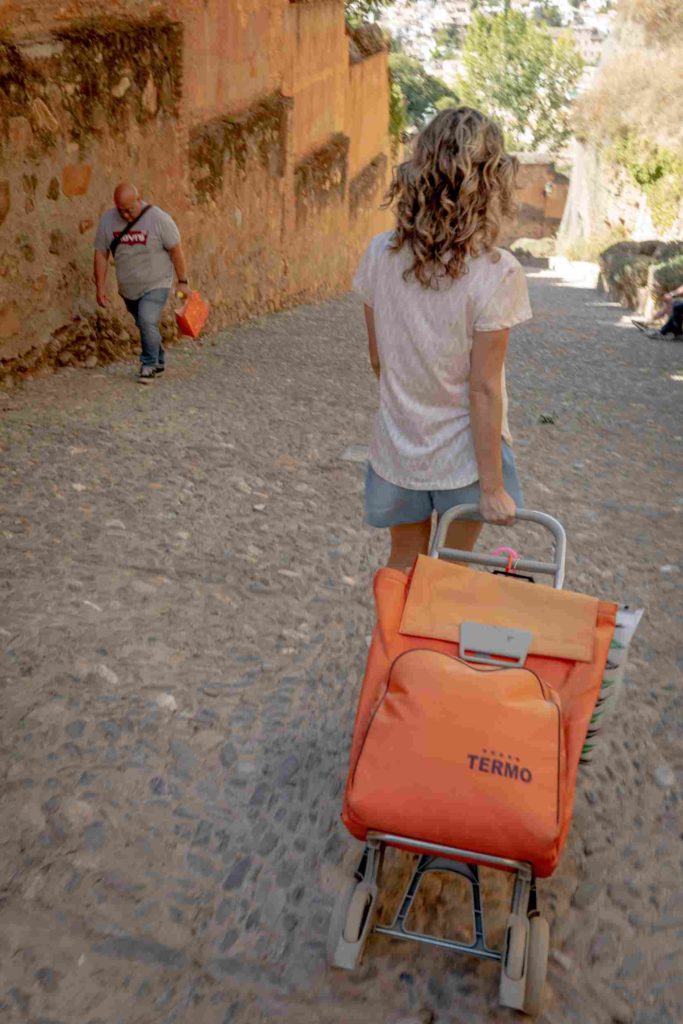 My question for Paul is, as someone who has been bitten by the travel bug, already travelled to many places and whose ambition is to see the world, what is it about Granada that made him want to come back? He tells me that it was a mixture of the weather (his being based in Burton-upon-Trent makes this entirely understandable!), the people and the creative vibe that made him want to return. 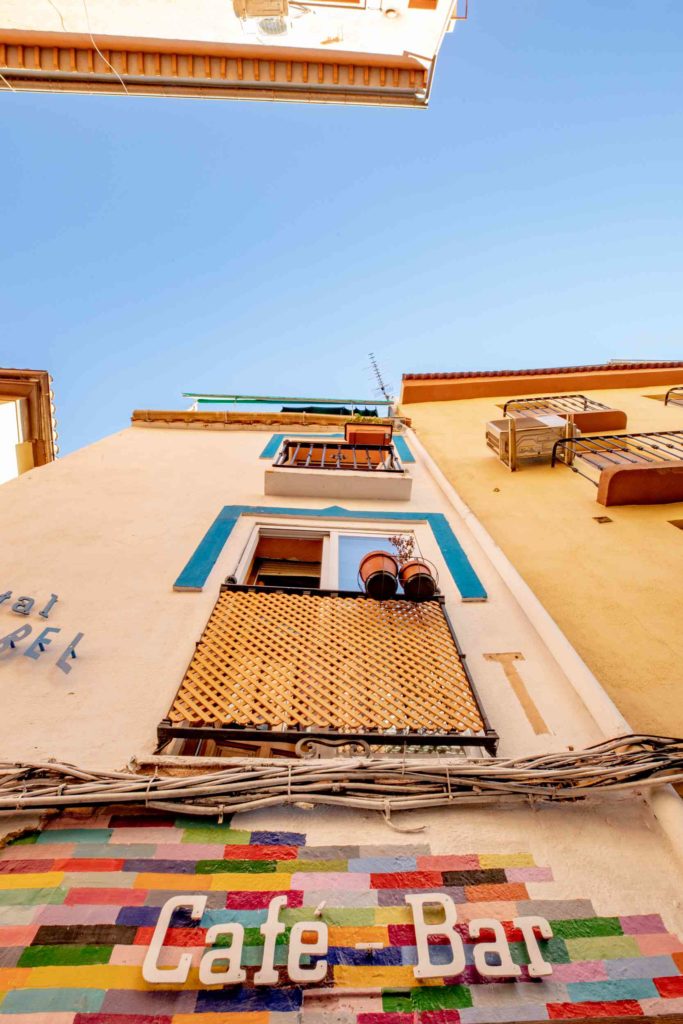 Prior to his first visit, Paul had never been to inland Spain before, his only Spanish experience having been on the Costa del Sol. He feels inspired by the history and the culture here, so clearly reflected in Granada’s streets, the “realness” of the crumbling ancient buildings and ornate architecture, juxtaposed side by side, poles apart but equally beautiful. He was charmed by Granada’s “real feel”, as he puts it, and as the keen street photographer that he is, inspired by its urban life. 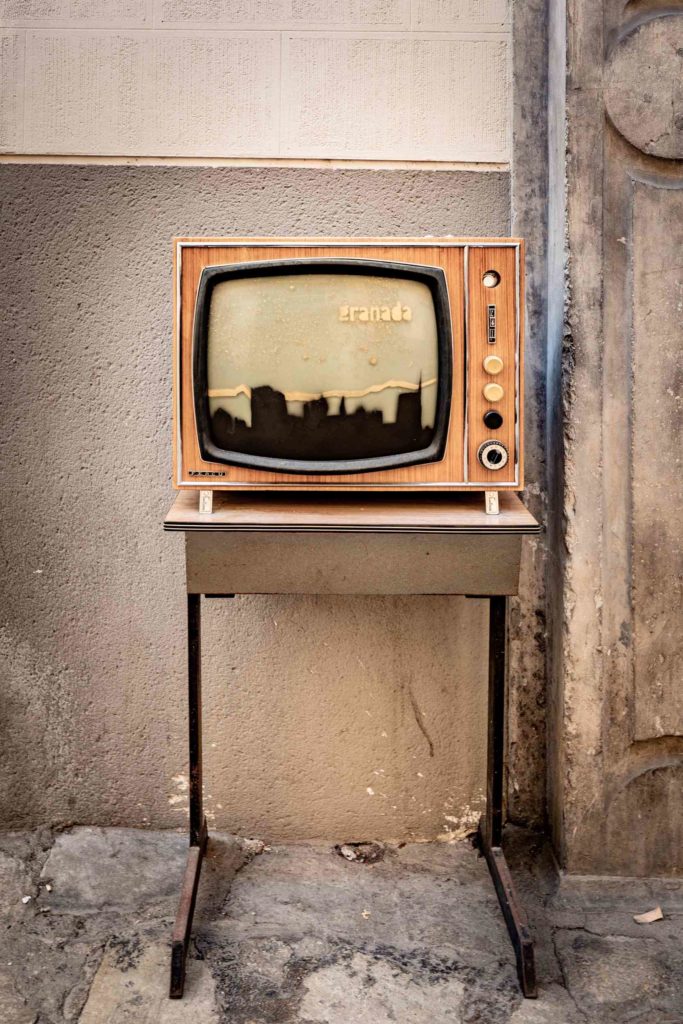 From a quality of life point of view, Granada certainly has a lot to offer. Probably best known for its free tapas, with soaring temperatures in summer, the beach just a 40-minute-drive away and traditional fiestas by the bucketload it ticks all the boxes when it comes to a stereotypical Spanish holiday. However, it has more than one ace hidden up its sleeve. 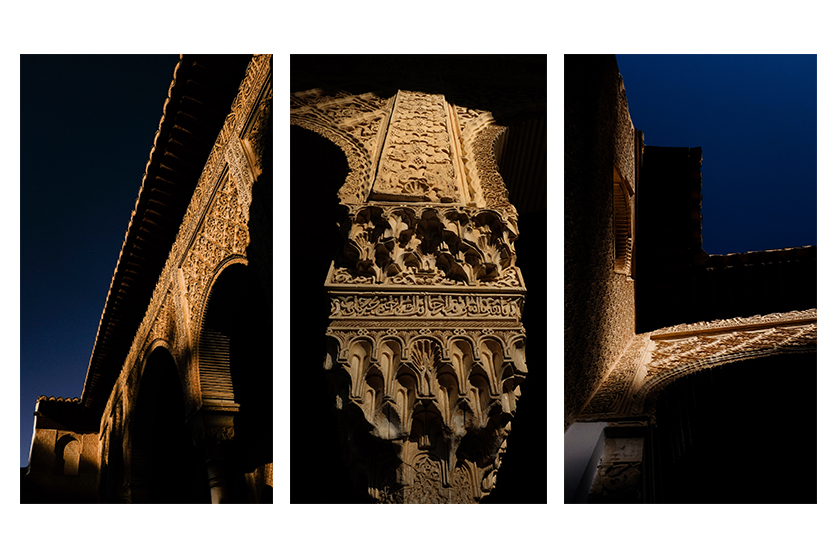 Creatives and music-lovers like Paul are drawn to Granada’s vibrant art and music scene, hikers are positively spoilt for choice with the Sierra Nevada national park (and ski station) just a 45-minute drive away and a huge amount of walks and small towns to be explored in the surrounding area; and the famous Alhambra is just one of the many cultural and historical gems to be found here. Without a doubt, there’s much more to Granada than what first meets the eye. 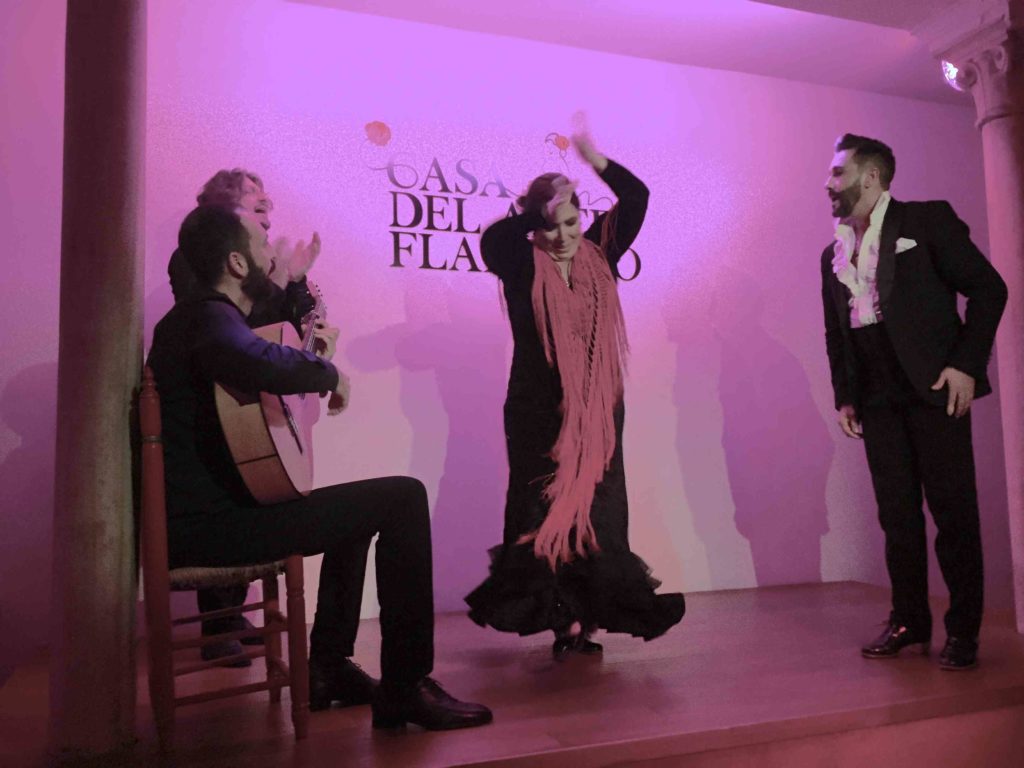 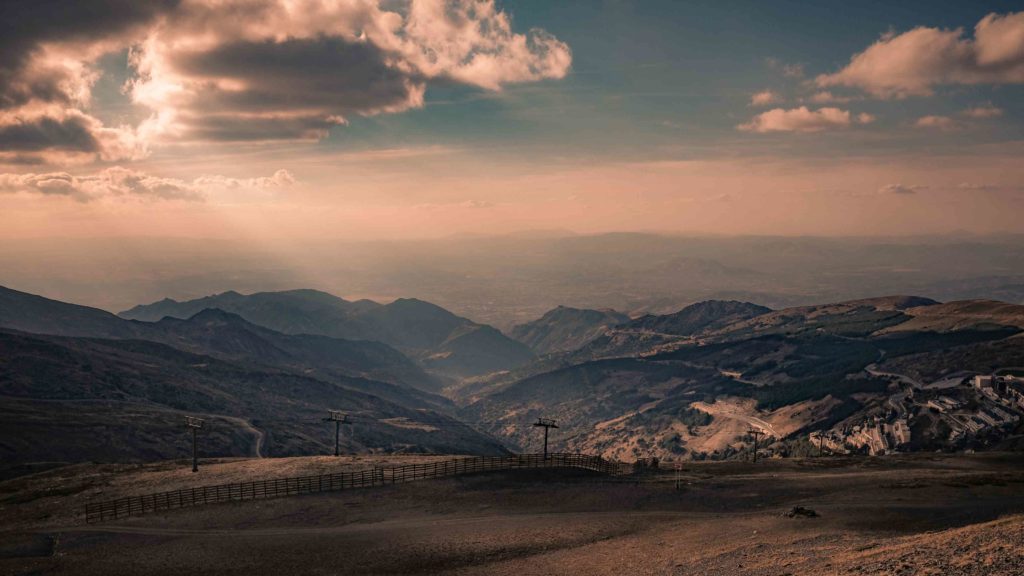 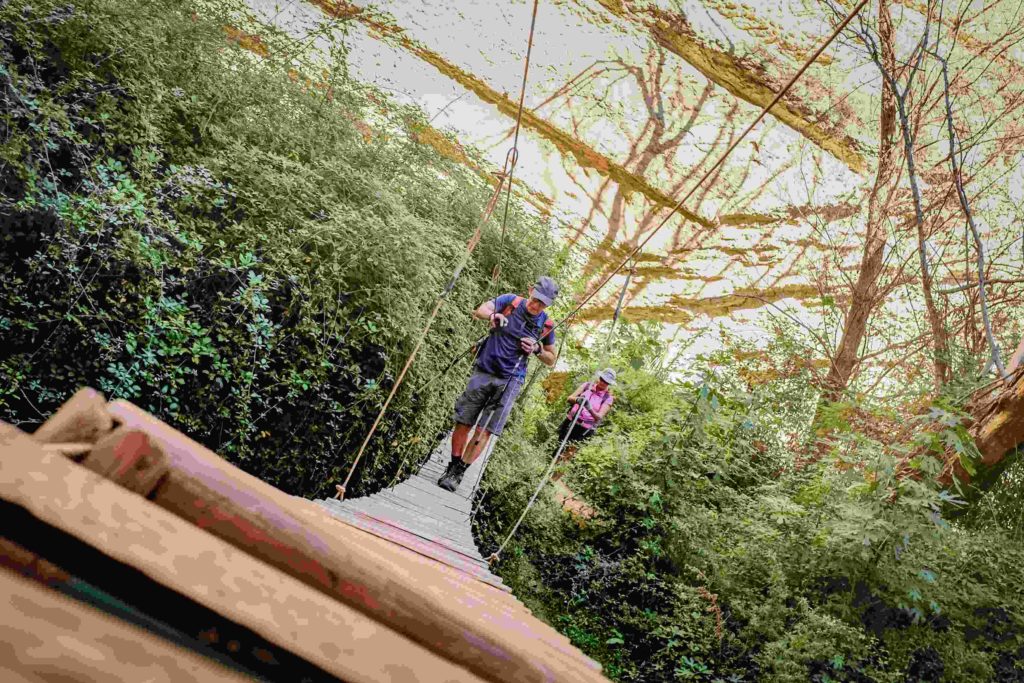 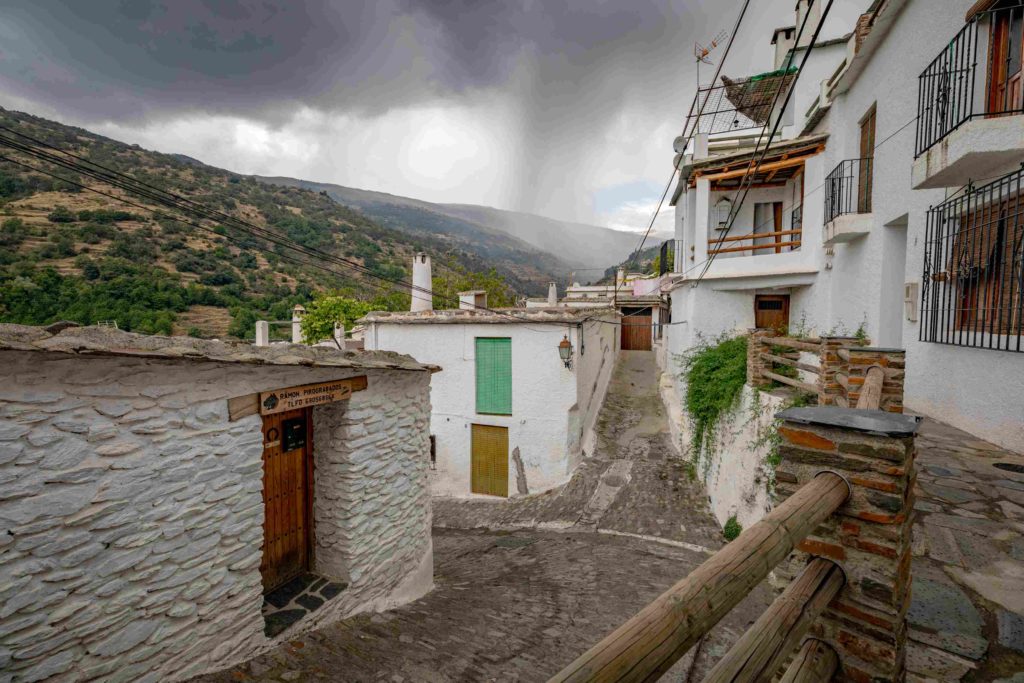 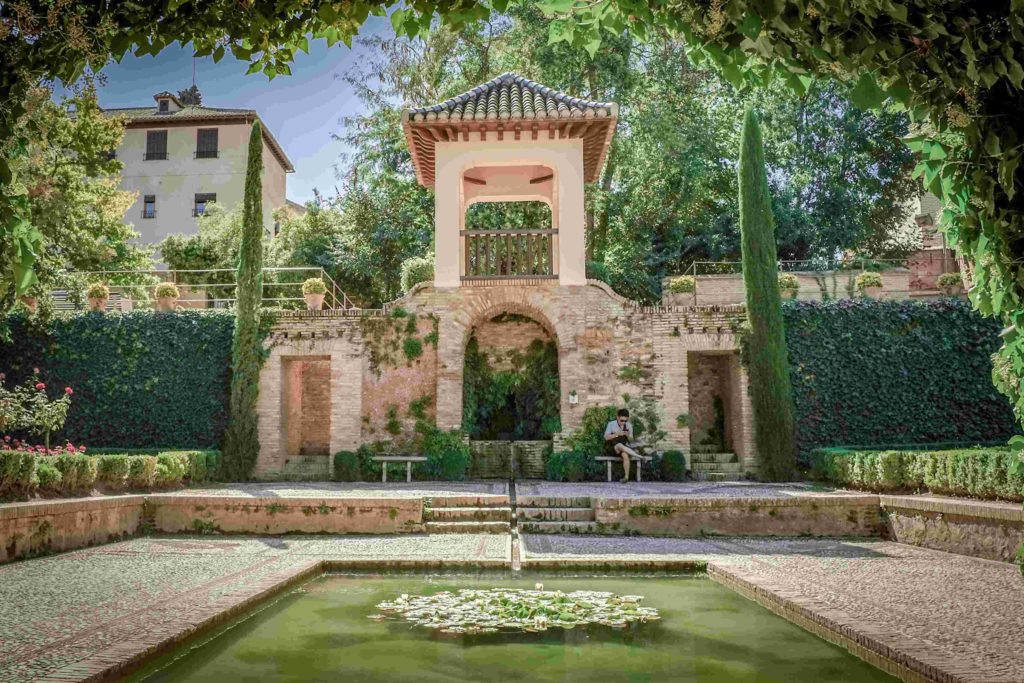 Our snap happy day is now drawing to a close. Having successfully made it to the Sacromonte in time for sunset, we sit on a wall at what feels like the top of the world watching the last of the sun’s rays illuminate the Alhambra and Granada at its feet. 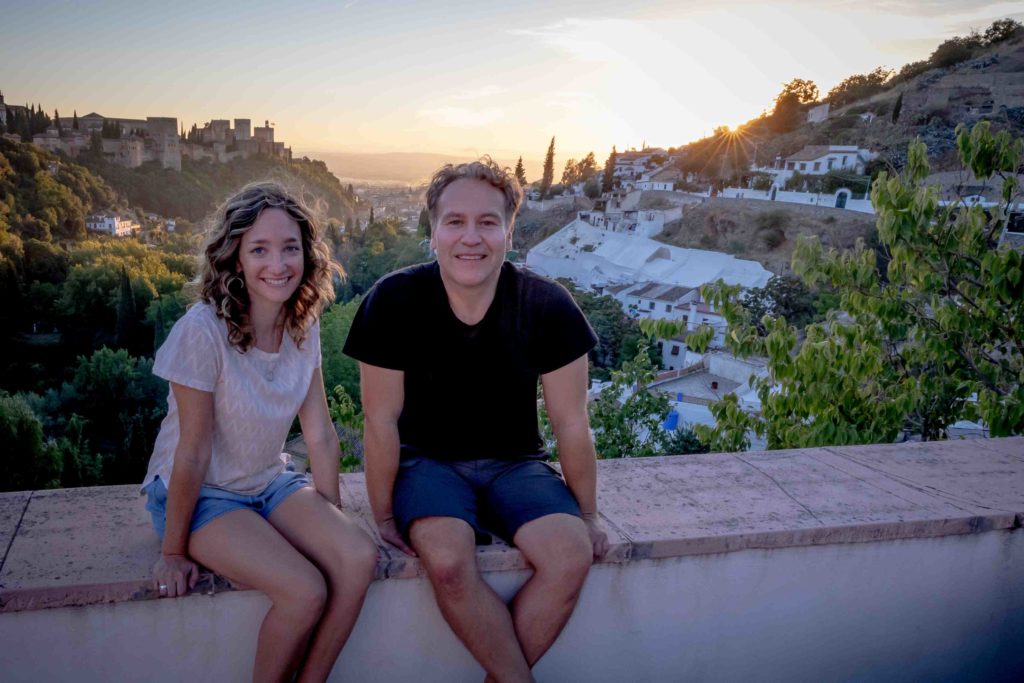 As evening falls we make our way downhill and back towards the centre, faithful Trudy rattling at my heels, and head to the Realejo neighbourhood for some well-deserved dinner and a glass of Rioja. I hope you’ve enjoyed our day in Granada, getting to know Paul and learning about his photography. If you haven’t been to Granada yet, what are you waiting for? Don’t forget to pack your camera! 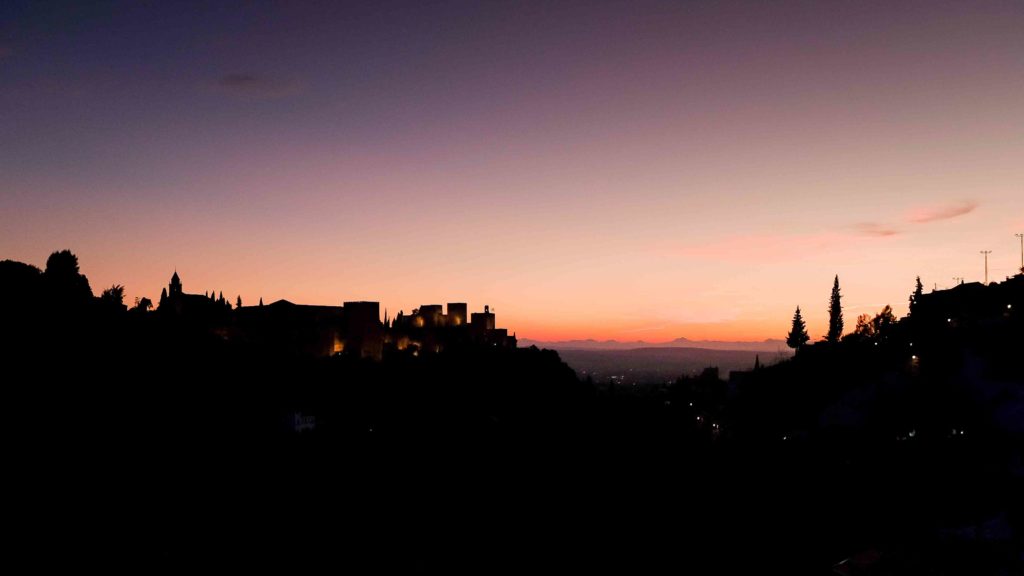 All photos by Paul Ainger Photography.