A Fairy Tale For All The Family

Your insider guide to festivities in Granada with Adélaïde Palvadeau

The streets of the city centre began to breathe the Christmas spirit last week as decorations in the shop-windows and streets   set the tone for the festive season: the magic is back.  Just like every year, Granada council organise different events to get the city into the spirit of Christmas. We had a word with the organisers of these annual events to help let you know what activities Granada has planned for December and January. 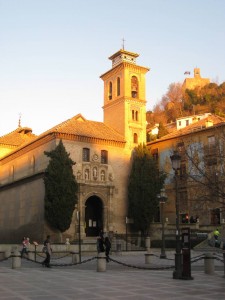 With the postcard landscapes of the Sierra Nevada and the river Genil, and a pinch of imagination, one might even think it may resemble the little town of Bethlem. Speaking about the nativity scene, cribs can be found around the city and not only in churches, one will be displayed in la Plaza del Carmen (the Town Hall square) from the 17th of December until  6th of January.

There is also a competition organised to select the best nativity scenes: the “Ruta de Belenes”. The scenes are selected from four categories: traditional, popular, crafts and children. The registration for the competition began Monday the 15th of November and about thirty participants are expected, churches, associations, colleges and shops of the city will all be taking part. You can visit the different nativity scenes from the 15th of December to the 7th of January. All the information and maps will be available soon in Granada Tourist Offices.

Another festive treat to enjoy is the popular “Mercado de la Plaza de Bib-Rambla” .   A fair that attracts the best “arts and crafts” from the region. It is also a great place to pick up last minute presents and stocking fillers. You can soak up the Christmas atmosphere wandering among the seventy stands that will fill the plaza and stop off in one of the many bars for something to warm you up. After visiting the stalls in the market you can sample the typical Christmas pastries of Spain, mantecados or turrón. The market will be opened from the 3rd of December to the 6th of January from 10am to 2pm and from 5pm to 10pm. 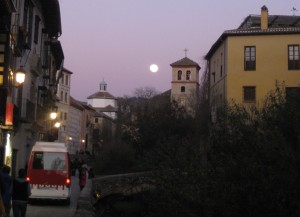 Finally, to conclude the Christmas season, the Cabalgata de los Reyes (the King’s Parade) which represents the visit of the 3 wise men (or magic kings) will take place on the 5th of January. The three wise men will parade through the city centre distributing sweets to the children. The procession   will begin from calle Ganivet and end in the Plaza del Salón or the Palacio de Congresos depending on the progress of the roadworks. Information will be available in the Town Hall, Tourist Offices and in local newspapers.

La Noche Vieja (New Year’s Eve) converts Granada into a one big party with everybody eating grapes at midnight (one for each chime of the bell). It is said that if you manage to eat all twelve grapes before the stroke of midnight you will have good luck for the coming year. Other tapas and typical food like olives, shellfish (especially prawns), chorizo, jamón Serrano all illustrate local Christmas and New Year culinary delights.

Read More About What Christmas (Navidad) in Spain is all about.