Home » A Day in the Life » Art Imitating Art, Life at the Mirador 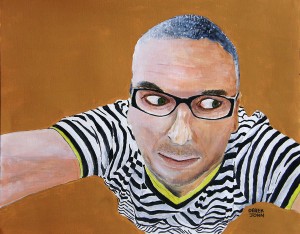 On the face of it setting up my wares in the Albaicin at the mirador San Nicolas seems a no brainer. The place ticks enough boxes for the would-be street vendor – floor space, stunning views, and of course a location naturally frequented by tourists, many of whom are highly sentimental and drunk on romance. What more can one hope for?

Alas, it seems one can have too much of a good thing.

There is a problem here and it’s this: you’re going toe to toe with the real thing, and in the real thing’s back yard. I mean, who’s going to buy your painting of the Alhambra when they can stand bedazzled by the beast itself, seductively set as it is against the backdrop of the Sierra Nevada, and shimmering effortlessly in an ever shifting play of light?

I’ve tried to tackle the ‘Alhambra Problem’ as I call it by going increasingly abstract. There’s little point in adding to the millions of competent reproductions already out there. Nevertheless I admit I often feel it’s probably better to steer clear of the subject altogether. It’s not just paintings of the Alhambra that pale into insignificance here though, nor just paintings in general. I’ve found that the mirador seems not to be a great place to sell anything despite the continued efforts of local vendors who assiduously lay out various trinkets and baubles. You can’t really grab anyone’s undivided attention as there’s so much ‘real stuff’ for people to take in (and let’s be honest, the plaza itself is worth a visit on its own merits).

But I love it here. There’s a certain life enhancing vibe that always makes me feel better for having visited. Ok, for all its magnificence and stupendous history dare I venture the view; that the Alhambra these days, is little more than a rather large piece of costume jewellery, one that is perhaps prostituted a little too cynically by the marketing bods? At best it’s an impossibly ornate window pane that allows just a tantalising glimpse of times past.

But all said and done this area of town is real enough.  It’s still alive, and still dynamic and continues to write its own history. One can’t fail to be wooed by the whitened walls and narrow cobbled streets of the Albaicin and the Sacromonte and by the people who live here cheek by jowl. What stories are locked up in these alleyways? Each time I visit I find a new twist of the road, a corner of a plaza I hadn’t noticed before and I wonder what went on here.

So it doesn’t bother me too much to be gathering my things with nothing sold. It’s a pleasure just being part of the whole experience. I glance around at my fellow vendors and wonder if they feel the same way. One thing’s for sure, there are plenty of smiles in evidence whatever the day’s commercial shortcomings. In little over two hours I didn’t see anyone sell anything here today. No one seems the least concerned.

With resignation I see one of my paintings has fallen victim to someone’s careless size 9 boots. Again. Two days in the making and two seconds in the trampling. Such is life. I can fix it up, no problem and I’ll be back again. Maybe I’ll bring along a couple of new Alhambra abstracts I’ve had an idea for. Then again, there’s probably no point.

Article written by Derek Dohren. He is available for commissioned work and offers a two day beginners painting class in Granada.

Visit his web site at